NTB Museum, The Historical and Cultural Museum in Lombok 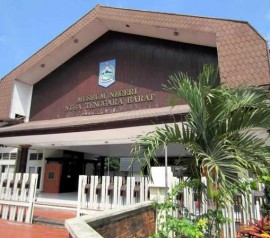 The Nusa Tenggara Barat (NTB) museum or sometimes called “Lombok Museum” is located in the Mataram city center and near on Sayang Sayang (Rendang Le Village). This non-profit institution-museum in Lombok was pioneered since 1976 and has been officially inaugurated in January 23, 1982. Now, the collection is reach 7513 pcs, and some of them are the historical age collections before mankind knows how to write and read, up till now. Inside the museum, you can not only see the artifact of tribes who dwelled Lombok and Sumbawa islands, but also artifact of china people who once came to trade here.

Before entering two buildings which are the permanent display building, in front of the lobby you will be welcomed by a 4,1 m preserved estuary crocodile which put in a big glass box. In the right and left wall of the room, there are two paintings which tell about Sumbawa and Lombok art.

In the first permanent building, you can see Sumbawa and Lombok island miniature which clearly show low lands, mountain, lake, and rivers in those two islands. In the north side of the building, is displayed several kinds of endangered animal and plants specimen which protected by the government, such as gaharu wood (Exoecaria aqallocia), kelicung wood (Dyospiros malabarica), Sumbawa myna bird, king halifron butterfly, and some sea biota.

From the first permanent building to the second one, you will pass a short corridor which in the middle has been placed Prambanan and Borobudur temple miniature.

The second permanent building is larger than the first one. When you entering this building, you will see four couples of bride and groom, which are wearing Sasak, Sumbawa, Bima, and Bali traditional bride cloth. In the next of Bali couple, there are two units of horse toys which called jaran kumput, that usually ridden by children who are going to have circumcised, when they are being paraded around their village. You could also see the weaving tool which usually used by people of Lombok and Bima. This kind of traditional weaving tool is still use up till now. You could also see weaving cloths with Bima and Sasak motif, such as subahnala and ngusuwaru motifs.

To follow the north side of the building, you will see many kind of Chinese porcelain from 10th – 14th century from Ching dynasty, traditional musical instrument, Hindu and Islam praying equipments, masks, Hindu statues of god, local people’s toy tools, sword, and dagger with Arab and Sasak letters. There are also two old nekara (some kind of skin-membrane drum made from bronze) which found in 1976 that are fill this north side of building. In the most north of the building, you can see jewelry, ceremony equipments, and dagger which made from gold and silver in glass box. Those art stuffs are the heritage of kingdoms in Nusa Tenggara Barat.

In the south side of the building, you will see takepan, a kind of script which is written using Sasak, Ngawi, and Arabic letters on palm tree and 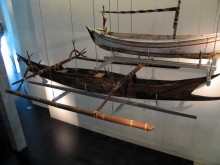 After knowing all aspects of NTB people’s life, you could visit NTB local library to read about NTB, Lombok Indonesia, and world in general. This largest library in this province is only 300 m from the NTB museum.