The Religious Harmony At Lingsar Temple 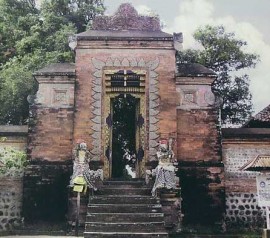 If you want to feel religious harmony symbol, you can meet it at Lingsar temple. This temple is considered to be a symbol of harmony between Hindu Bali Lombok and Islam Sasak Lombok. This temple was built in 1714 by comer from Bali and has been renovated. 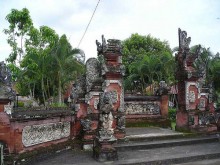 Before entering this Lombok temple, you will pass a garden with twin pools inside which filled with lotus. Lingsar temple consists of three main building, which are gaduh, kemaliq, and pesiraman. Gaduh is a sacred place for Hindu. Inside, you can see four junctions which symbolize god who dwell two mountains. The junction in the east side was built to worship god in Rinjani mountain. The junction in the west side, was built to worship god in Agung mountain. Between those two junctions, there are two united pesinggahan (stopover) which is symbolize the combination between the junction in Rinjani and Agung mountain.

If you’re stepping down the stairs in front of gaduh, it will lead you to kemaliq door. This area is a sacred place according to Islam wetu teachings. But Hindu people are allowed to pray in this place.

In kemaliq area, there is a small pond which dwells by a tuna fish which considered to be sacred. Allegedly, it is an incarnation of Datuk Milir’s stick, a king of Lombok island who meditated in this place to request for rain. Hindu and Islam people in Wetu Telu believe that if you see this tuna fish, you will get lucky. For that, you can bring boiled egg to invite it. In this small pond, you could also make a wish and throw a coin in the pool with the hope that your wish will come true.

In the other side, which only bordered by a wall, there are nine fountains which flow from the small pond. 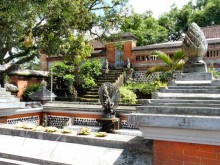 For fountain still in Kemaliq area, while the other five in Pesiraman area. This place is used to purify ourselves. The fountains are believed can heal many illness.

If you visit this place at full moon in the 6th month of Saka (The Hindu’s calendar), or around October or December, you will able to see perang topat (a type of rice cake wrapped in woven coconut leaves). This ritual is a part of Pujawali ceremony (temple’s birthday). Perang topat is purposed to beg for rain and prosperity. Basically, this ceremony tends to be Hindu Bali way, but the use of ketupat is the Islam people’s characteristic.

If you’re satisfy to see the temple all around, try to move to the south side of the temple. There are some berugak (gazebo) next to the main pool, which is the biggest pool in this Lombok temple.

If you have enough time, you could arrange your trip to Suranadi temple with its natural park, or to Narmada temple.

Lingsar temple located approximately 8 km from Mataram city near with The biggest temple in Lombok. To reach it, you will need 20 minutes by car or by motorbike with route Mataram-Cakranegara-Selagalas-Lingsar. While by public transportation, you have to change it three times, first route is Ampenan-Sweta (cost IDR 3,000), Sweta-Narmada (cost IDR 2,000), and Narmada-Lingsar (cost IDR 2,000). If you think necessary, you could use guide service which available in the temple.