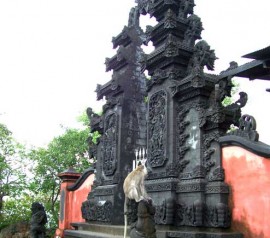 Besides Hindu’s strong characteristic and religious atmosphere, natural and shady nuance seems become a characteristic for Hindu praying place. So does with the Pengsong temple which is in Pengsong mountain. This mountain is able to create tranquility which fit to your spiritual tourism. 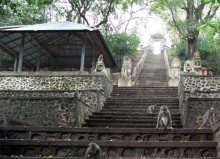 The real name of this temple is Pangsung. The name was taken from the word Pangsung in Sanskret language which mean place to beg for Sang Hyang Widhi Wasa’s bless. Pengsong temple is a place which is so perfect to do routine sacrifice for Hindu people either its for holidays, of for usual day.

By Sasak Lombok people, this temple often called as Pengsong mount temple. This name has its own history. It is said that in the hill where the temple was built, there was so many treasure were found in the form of gold and coin. Those treasures are Japanese remnants. That is why the Sasak people called it Pengsong mountain. Pengsong comes from the word peng which means kepeng, or coin, and song which means holed. If these words combined, Pengsong means coin with hole in the middle of it.

Pangsung temple was built in 1514. Who built it and how the background was, is unknown for sure. The history of its establishment was written in palm leave book. But the existence and the content of it is so sacred, so to open it has to be done in certain days only with certain ceremony as well. According to the caretaker, Pengsong temple was built by Ida Bethara Wayan Sebali, a Hindu prienst from Geria Pendem, Karangasem, Bali. According to him, this temple is the oldest temple is Lombok island.

In Pengsong mount, there are three main temples which located precisely in pelawangan ( back of the hill/almost get into mountain’s top) with height around 400 m above sea level. Those three temples are Rinjani Mount Temple, Meranggu and Pangsung temple. To get there, you have to take 286 stairs, which need effort and energy to get into the main temple. When you get into pelawangan, you can straightly pray or take a rest for a moment while enjoying the panorama from above Pengsong mountain. The view of rice field, houses, till the view of Padang Rea Kuranji village bay, is clearly shown. It’s a pity if you miss it. 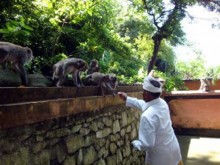 Pangsung temple can be reached by taxi motor with cost IDR 50,000-60,000, and you still can bargain for it. You could also use taxi, but its better if you use personal/rental car/motorbike. The temple can be reached in 40 minutes. The best route is Mataram-Cakranegara-Dasan Cermen-Bagek Polak-Perampuan-Pengsong. Another route is Mataram Lombok-Gomong-South Ring Road-Perampuan Village-Pengsong.

The first impression once you get into Pengsong mountain is cool and shady. Many shady trees are here, and some of them are hundreds of years-banyan tree with its thick hanging roots. The special sound of tengerek and funny acts of the monkeys is making the natural atmosphere stronger. Before heading to the main temple, you can relax for a while by giving food to the monkeys.