To Know The History Of Islam At Bayan Beleq Mosque 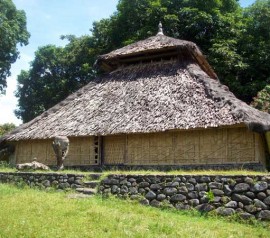 The civilization which developed in Lombok island is Islam. Almost 90% of the people are moslem. But if you want to know the history as well as to see the remnant of it, come and visit Bayan Beleq mosque, the oldest mosque in Lombok island.

Bayan Beleq mosque is located around 80 km from Mataram, and becomes the most wanted attraction for the local or foreign visitors. The visitors are not the Islam wetu telu followers only, but also those who want to know the history of Islam in Lombok island.

This mosque was built by Syeh Gaus Abdul Razak, one of Islam missionary in Bayan in 16th century. The mosque has square shape with wall’s height around 125 cm. the wall is made from bamboo weaving which stands on stone foundation as high as an adult’s waist. The roof is shape like meru and in the top of it there is wood decoration which shape like a crown. The shape of the roof building describes the Hindu-Java influence which came before Islam.

In front of the mosque, precisely in the north side of the mosque door, there is a gentong (an earthen pot uses to keep water supply). The gentong is sat and tied to a semboja tree. This gentong functions to keep the water for wudhu (an Islam procedure to clean the body before praying).

To enter the mosque, you have to bow a bit. Inside the mosque, you will see floor from land, and an old big bedug (a large suspended drum used to signal the time for Islamic prayers to begin) which still well preserved. The four pillars of the mosque symbolize the unity of four villages which contributed in building the mosque.

You could also see two decorations in the shape of fish and bird above those pillars. Every decoration has its own meaning. Fish is a creature lives in water and has a meaning as a lower life / earthly. While the bird is described as a life after death. The meaning is that every faithful human should be able to balance the earthly and heavenly life. Besides, you could also see the decorations in the shape od tree, egg, chicken and dragon hanging above the altar. In the dragon’s body there are three birds which represent Islam wetu telu.

Islam wetu telu is a teaching which hold on three things : religion, custom and government. Wetu telu is a reflection of the history of human kind on earth, which was born as a will of God through parents as a media.

Besides the mosque as the main building, you will see six other buildings surround it. The size are different. Inside these six buildings, there is Bayan moslem ancestor’s grave . you could also see four graves with different size and irregular position in the south side of the mosque. Underneath the graves, has been buried the first people of Bayan who hold Islam Lombok and the first Islam missionary in Bayan. In the north side of the mosque, there are two graves, one is belongs to Syekh Gaus Abdul Razak, and Titi Mas Penghulu.

After satisfy in seeing the Islam remnant, you can step by to local souvenir shop in front of Bayan Beleg mosque. There, you can buy miniature of Bayan Beleq mosque and other Lombok traditional stuffs.

You can also visit this mosque by personal/rental car in 2 hours from Mataram city. The route you can take is Mataram-Senggigi-Pemenang-Tanjung-Gangga-Anyar-Bayan. You can also take public transportation to reach it, but with time consideration and the public means availability, it’s better if you take personal/rental car to get here.